Hawk SnowWhite is one of the main characters of Regal Academy. He is the grandson of Snow White. His love interest is Rose Cinderella.

Hawk thinks he’s the perfect prince charming and fairy tale hero (and yes, girls do adore him!) but sometimes his extreme bravery puts him and his whole team in danger!

Hawk’s smile can freeze any girl in her tracks. And his wand can freeze anything - thanks to his Snow Magic! From slaying monsters to rescuing damsels in distress, he’s always trying to be prince charming. When he’s not playing the hero, he’s cooking up apples in the kitchen. Hawk’s a firm believer in eating one (or one dozen) a day… Which he totally gets from his famous grandmother, Snow White.

He has short blue hair with his bangs over his face and turquoise eyes.

His civilian clothing consists of a pair of blue jeans and a long sleeved shirt that is colored in shades of red, blue, and gray. A silhouette of an apple is also printed on the shirt as well.

Hawk is always up for an challenge and can be hardheaded at times. That leads the team into danger quite often. He is charming but at the same time humble when he is. There is even a true romantic side when he has his moments with Rose. He loves to adventure and save the day. But sometimes, he and Travis compare each other.

Hawk's parents are professional heroes, as mentioned in "The Parents' Day

Hawk is seen to have a major crush on Rose, but Rose is mostly clueless. But they are wound to not admit their feelings for each other due to being interuppted by spurs of the moment.

Hawk and Rose are friends on the same team. But as the 1st and 2nd seasons of the show progressed, their relationship started growing from just being friends to having crushes on each other by the time season 2 hit.

Hawk getting ready to attack. 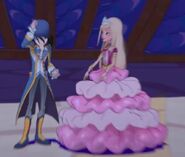 Add a photo to this gallery
Retrieved from "https://regalacademy.fandom.com/wiki/Hawk_SnowWhite?oldid=4623"
Community content is available under CC-BY-SA unless otherwise noted.