Astoria Rapunzel is one of the main characters of Regal Academy. She is the granddaughter of Rapunzel.

She’s Regal Academy's bookworm, a poised and confident princess... just as long as everything is “just so”. She is definitely a real super-nerd!

Astoria is Regal Academy’s resident bookworm. When she’s not raising her hand in class, she hiding behind some huge old book in the library. She’s a perfectionist who has everything under control...except her pesky mane of long beautiful hair (which has a mind of its own!). She also has the power to control wild ivy--which sounds weird, but totally comes in handy!

She has long pink wavy hair, with two streaks of light blue hair, on her bangs, that’s tied with a large orange hairbow on the bottom. She has green eyes and wears light blue eyeshadow. Her outfit consist of a dark pink and yellow trimmed tank top, a purple long sleeve undershirt over a rolled -p white-collared, a yellow and black-striped necktie, a light orange pencil skirt with a blue fabric covering the side slit, a pair of dark pink leggings and a pair of blue ankle strap heels.

Astoria Rapunzel is a studious girl who aims for the top and constantly has good grades on the mind and is known as the smartest girl in the school. Known as a bookworm, she likes studying and loves to add to her knowledge. Astoria is a bit introverted and a big time perfectionist. She loves to see that everything is in order which at times stops her from having fun. She’s also labeled as the smartest girl in Regal Academy.

Although Astoria's hair is on acts on its own accord, she's fond of it and cares for it, making sure it’s perfect at all times. She is smart, hard-working, and a genius. She often acts as their team leader, sorting her teammates out and coming up with coordinated plans. However, Astoria also loves her friends deeply. She acknowledges them for everything they've done for her, and tries to do the same in return. Astoria is a bit stubborn and at times, hot-headed, with a temper that flares up easily. However, she is not arrogant, and knows when to own up to her mistakes.

Astoria was born and raised in Rapunzel's castle. Her childhood friend was Odette, the granddaughter of the Swan Princess. Astoria dreamed of becoming the headmistress of Regal Academy and got caught up in her studies and as a result, lost contact with Odette. 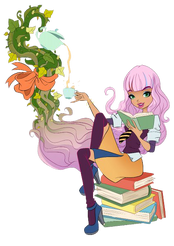 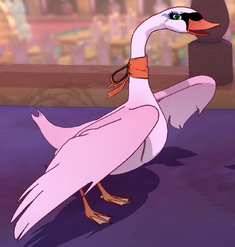 Add a photo to this gallery
Retrieved from "https://regalacademy.fandom.com/wiki/Astoria_Rapunzel?oldid=5031"
Community content is available under CC-BY-SA unless otherwise noted.